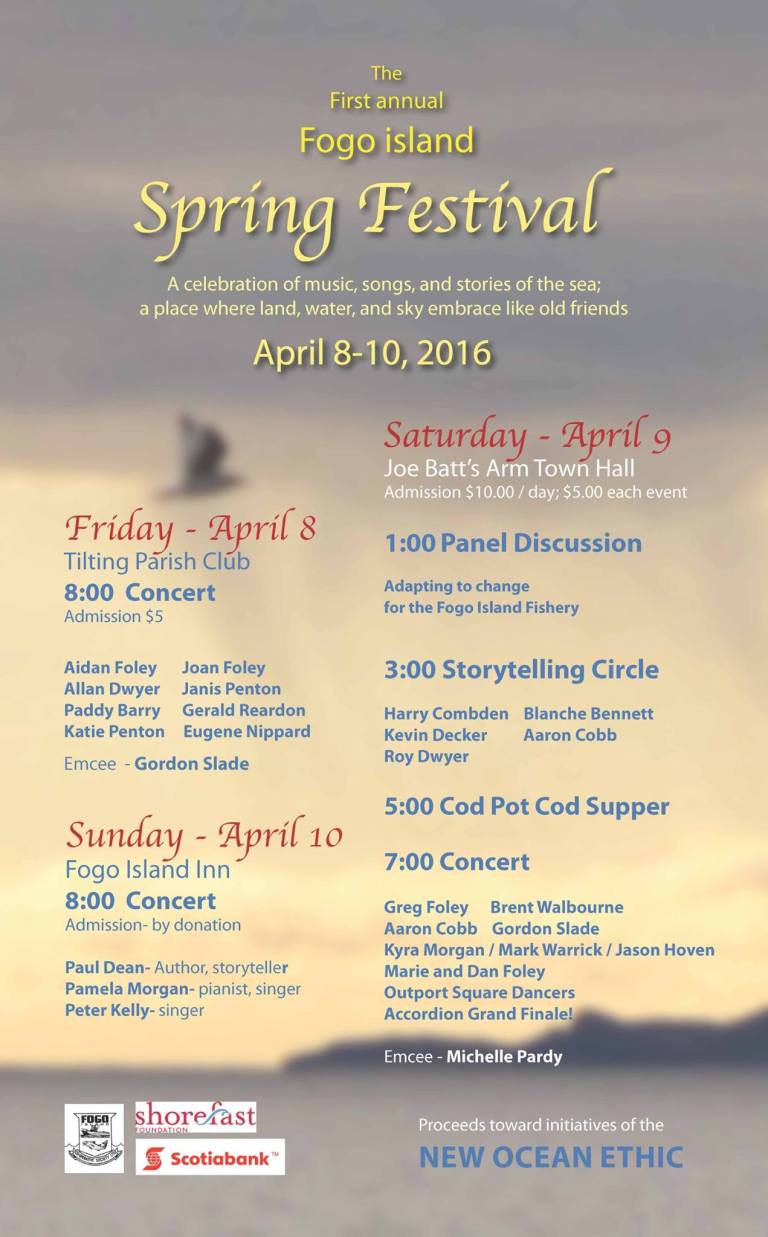 It was the storytelling that got me.

When I saw Blanche Bennett’s name on the list, I got nervous….she knows too much….

We were packed and ready to go Friday night and on the road the next morning by 6:15 for the ferry scheduled for 8 a.m. Everything went according to plan until 8 a.m. Due to an emergency, the ferry had to do a direct trip from Fogo Island to get an ambulance to the main road for a long trip to Gander, so our trip was delayed while the ferry did a return trip to Change Islands to compensate for not having picked them up on the way. 8 a.m. crossing is now a 9 a.m. crossing. 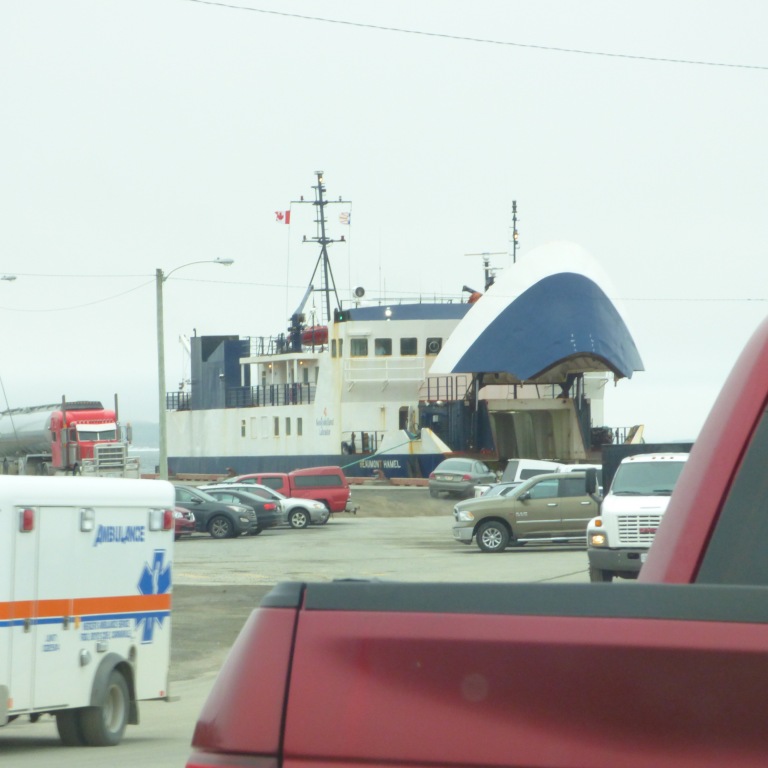 Understandable, because we know the importance of emergency ambulance trips and we had brought snacks from the Gander Bread Box. They really should be a corporate sponsor or something.

A bagel, a slice of bologna and a bit of cheese. Breakfast of champions. Dashboard dining.

We’d made a bid on a washer and dryer that the lovely Blanche was selling so stopped there first. With the help of her neighbour Adam, the washer was aboard our little truck in no time and off we went to Deep Bay. We unloaded the washer and all of our gear for the night and headed back to get the dryer off Blanche’s bridge. Again, with the help of Adam, we were on our way and had both in the house by 12:30.

I stopped and took it all in. Two weeks ago a string of caribou had been posed on this ice. 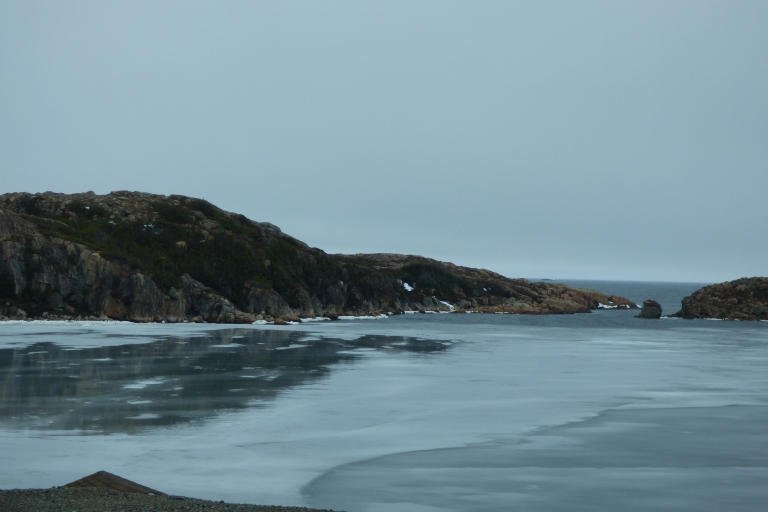 We realized the day was half gone and quickly dressed for supper (as much as we ever dressed for supper, clean shirts) and headed out again, arriving at the Community Hall in Joe Batt’s Arm just in time for the start of the Panel Presentations about the fishery.

(Usual readers may notice we didn’t talk about lunch.

Yes, too busy to stop to eat this trip.)

Another one of those cheese buns from the Bread Box, eaten in the truck, after changing our shirts, and a muffin and coffee at the panel discussion.

The New Ocean Ethic is a project of the Shorefast Foundation and while I don’t understand the full impact, I was aware of some of their projects like the use of Cod Pots as part of research and development of more sustainable fishing methods. This Spring Festival was dedicated to the fishery as a theme and is a tool to increase awareness of initiatives on Fogo Island and to educate the general public (me) about the fishery.

I was most moved by Glen Best who talked about being a fisherman since the age of 17 and being a descendant of fishermen who came to Fogo Island in the 1800’s. Aubrey Payne had a similar story and both feel they are the last generation in their families who will fish. Both also talked about the substantial financial investments they made in the fishery to only have it closed within a year of their purchases. One man stated $750 000 spent two years before the Moratorium.

Rather than lamenting past wrongs, the fishers talked about the future and their concerns and also initiatives they see being tried. One concern for how to finance young people who want to join the fishery was expressed and I understood a move towards smaller boats and enterprises was something they see as a future where I had seen that as the past. 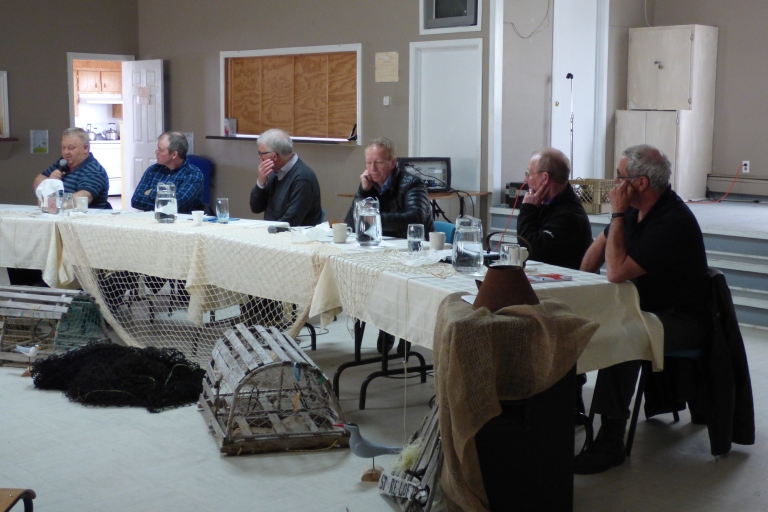 I cannot do justice to the knowledge and passion of these men about the fishery but they are all engaged in not only the industry, but  in the discussions, negotiations and debates that are required to protect stocks and individuals.

It was also interesting to hear Tony Cobb speak about the importance of the fishery to the success and future of the Fogo Island Inn. Shorefast Foundation has maintained this principle from the beginning in discussions with all levels of government.

There was also an indication that while scientists are not discussing it, shellfish stocks are declining in fishermen’s views due to a return of some of the groundfish population that had previously been decimated. Fishermen around the table felt that their expertise and experience was often discounted for political or other reasons but also feel that politics might be on their side now with a Liberal government federally and provincially. Discussion was also focused on getting the best price for fish by delivering a premium product to the consumer.

CBC article posted the day before the Panel discussion.

Time will tell but for sure, this panel on the fishers was about the future and the positivity of that future. I encourage people to attend next year and hear this discussion.

The Panel was two hours long and was followed by the story tellers who arrived from various communities around Fogo Island.

Paul Dean moderated the group and we heard a variety of stories, mostly related to aspects of the fishery. Blanche’s story about her father’s pink fish was one Leo remembered hearing many times from Blanche’s mother and father. It was the loss of the whole income for Heber and his crew and would probably have been told in other families too.

My favorite story might have been Clem Dwyer’s story about his mother stopping the wind with a religious picture. I won’t spoil it, but it’s worth asking him about if you ever visit Fogo Island. 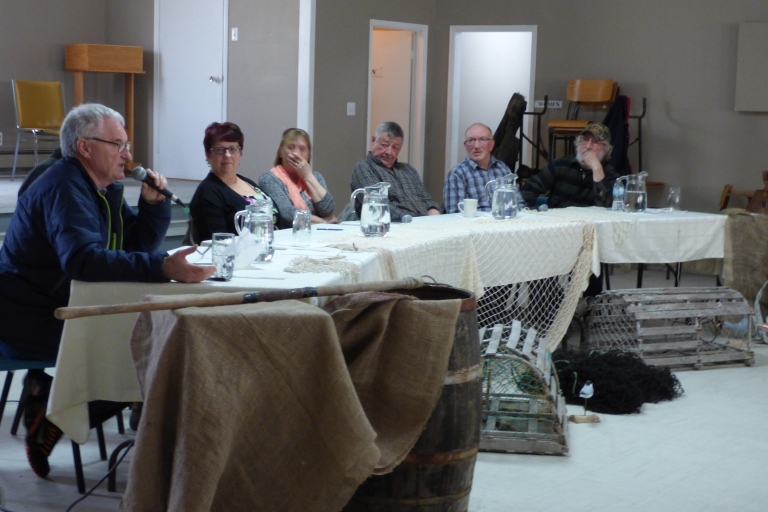 I had told Blanche I’d pick up hoses for her new washer and a dryer vent hose too. (Still nervous about what she was going to talk about….) so we had to make an early exit from the story telling. Hardware store was closed and I guess Blanche is finding out now she’ll need hoses…..Ooops!

From there were headed to the Fogo Island Inn for our dinner date with Leo’s daughter Lisa. We had a visit and a drink in her room while the boys assessed the best vantage for hunting ducks from Room 14. 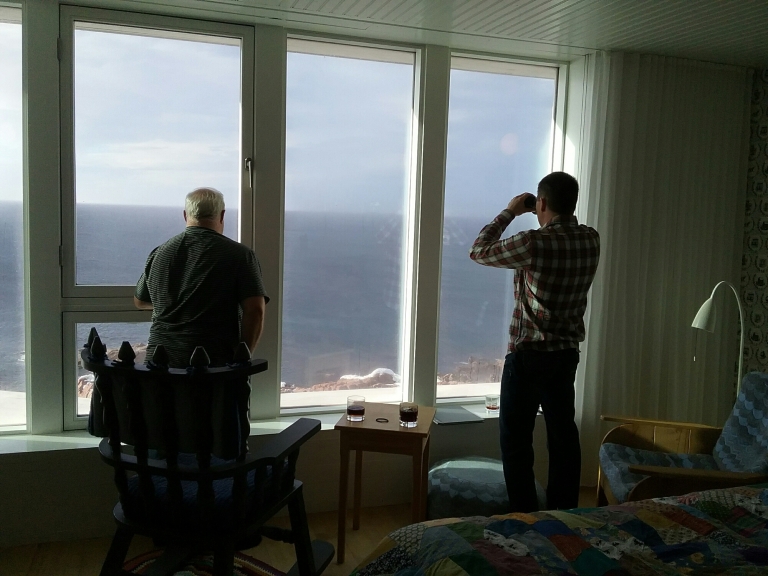 Lisa and I discussed the preferred times for the hot tubs on the roof and when we were coming again. Hunters and gathers vs planners. 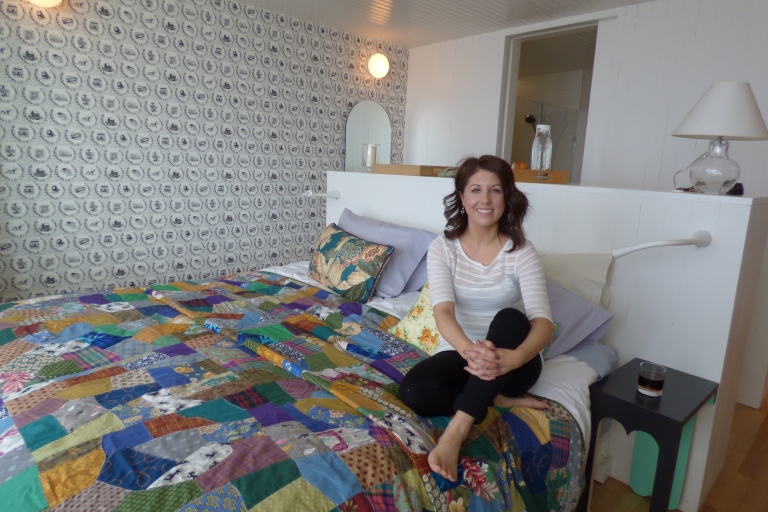 On our way to the dining room I introduced myself to Chef Ian. His proud mom Cathy is one of my Facebook buddies and we have met at the Inn a couple of times. We had a little visit and he headed to the kitchen when he confirmed we were ready for supper.

Our menu offered choices for both appetizers and entrées. When a small number of guests stay, the dining room changes the menu nightly rather than offering the full menu. Ian had our server, Lorraine ask if we’d like to have a tasting version of the whole menu rather than making choices and we took advantage of this generous offer.

What a great treat.

We made up of the dashboard dining and more! Check the captions for descriptions of our 5 course meal. 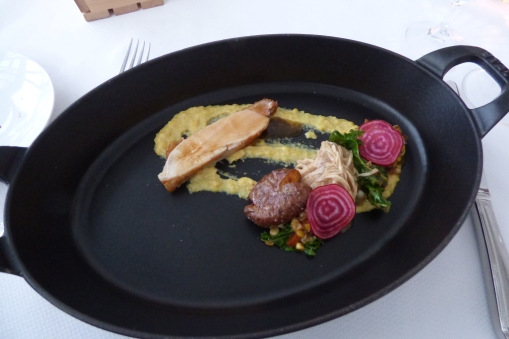 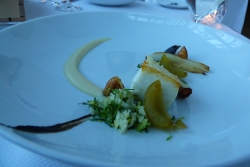 Halibut with roasted parnip and plum. 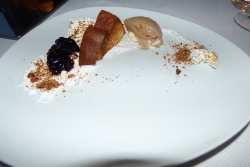 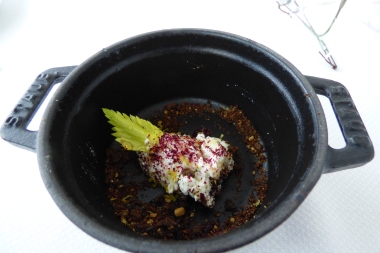 A bit of fresh cheese Ian made this afternoon. 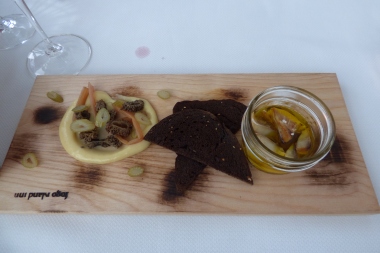 We enjoyed the dining room with guests from Canada and the states. One couple was celebrating their wedding anniversary and another couple had celebrated a birthday a day earlier. It’s a great place for celebration.

One would think this was a full day but we knew there was still a concert at the Hall so we went there a bit after 8 p.m. Stories, jokes, recitations, songs and square dancing followed for a couple of hours. Video 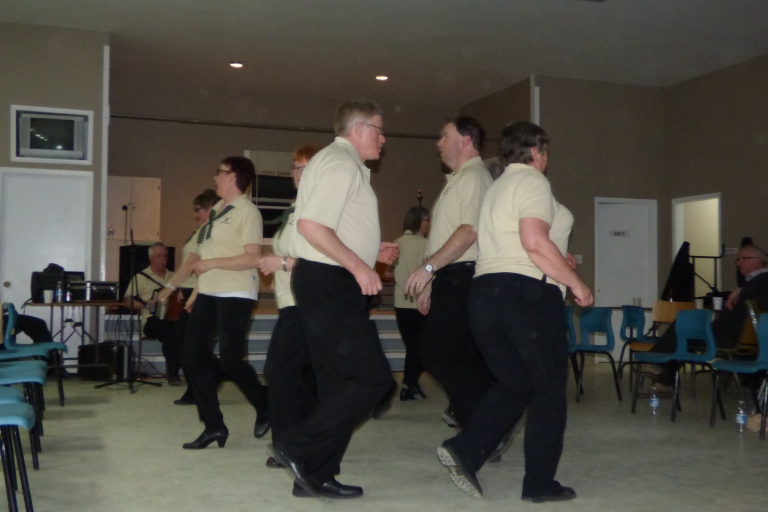 We didn’t get to visit with people there because there was no down time from the entertainers and the lovely night ended with everyone singing the Ode to Newfoundland. First and last verse, because as the saying goes, the middle verses are just a bad forecast.

The Ode by the Outport Dancers video

Home to Deep Bay around 11 p.m. watching the beautiful starry sky (and wishing I was in the hot tub at the Inn) and we finally sat for a few minutes in our little house.

We were awake early in the morning to start getting ready for the early crossing to avoid getting home late.

A few minutes to load the truck and take pictures that just needed to be taken and we were heading to the ferry, planning next time. We stopped at Chesters to get enough wifi to find out the crossing was a 9 a.m. and headed to the wharf.

Last of the grub from the cooler. Dashboard dining again. 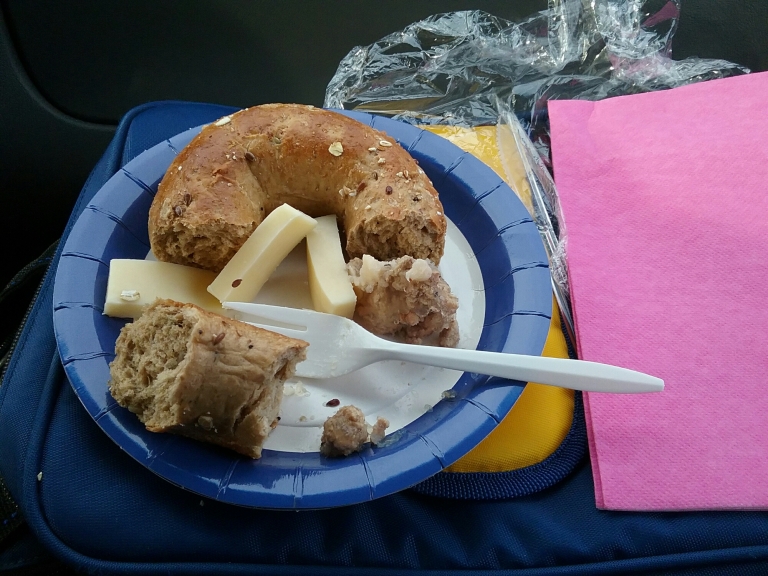