When I first started travelling to Fogo Island over 20 years ago, the MV Captain Earl W. Winsor was called the “new ferry” and the old ferries were the Beaumont Hamel and Hamilton Sound. The ‘new ferry’ seemed a bit familiar to me and I soon realized she was the former Prince Edward, a ferry I had often travelled on between university in Nova Scotia and my parents’ home in Prince Edward Island. Not too much new about her except some refit work and a new name in 1988.

Now the Winsor is the “old ferry”.

After years of service, most good and some poor, she is due to be replaced in October by the newly built Veteran. 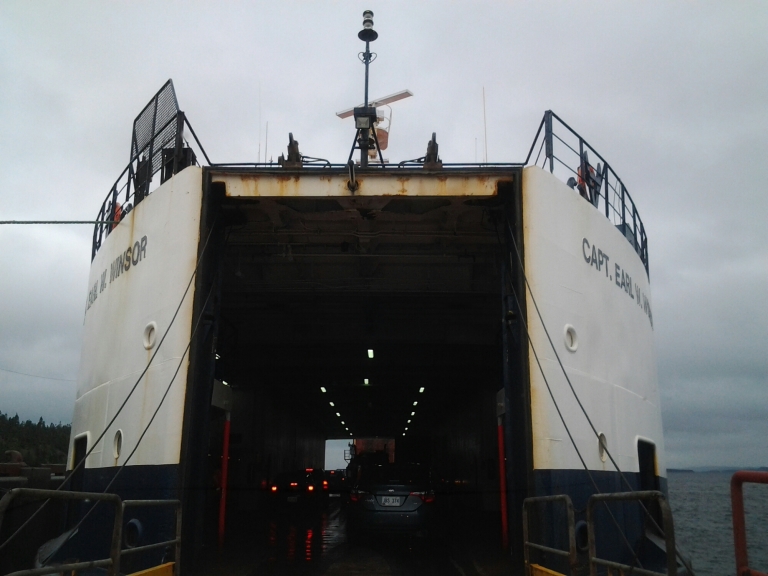 Ferry service is of special importance to people who are islanders. It’s not just the link to ‘the mainland’ or even Newfoundland but it is also access to medical services and it is the means of arrival of just about anything sold in a store, any store. Groceries, clothing, nails, medicine, toilet paper, paint, and even home heating oil arrive on the ferry. And when the ferry doesn’t run, nothing arrives, no one arrives and no one gets off the island. In extreme situations, air transport is provided but at a half a million dollars for these two Islands last year alone, it’s time for newer, more reliable vessels.

It’s also considered a right to have a reliable ferry service and not a privilege or a luxury. Many who do not know the politics of both Newfoundland and Prince Edward Island joining Confederation would not realize ferry services were part of the terms of agreement. A link to Canada was promised.

For Fogo Islanders and Change Islanders, only fiercely resisting resettlement and regular political activism as well as creating an economy around crab, shrimp and other fisheries has forced the government to continue to provide a service.

It’s a wonderful thing when the ferries are running well.

As the new boat, the Winsor was a wonder, taking almost twice as many passengers per trip or more as the old boats. With a prosperous fishery on Fogo and Change Islands, transport trucks with crab and other products depend on the ferry too and extra space was a good thing.

Just like when we move into a new house, gradually that extra space got filled. Traffic continues to increase to and from Fogo Island. Transport trucks, more workers going regularly for turn-around work elsewhere, and the tourists coming to see the now world famous Fogo Island are lining up and often, on busy weekends, waiting for a trip to two before they get to cross. Let’s not even talk about the campers! Some of them make the transport trucks look like Tonka toys! 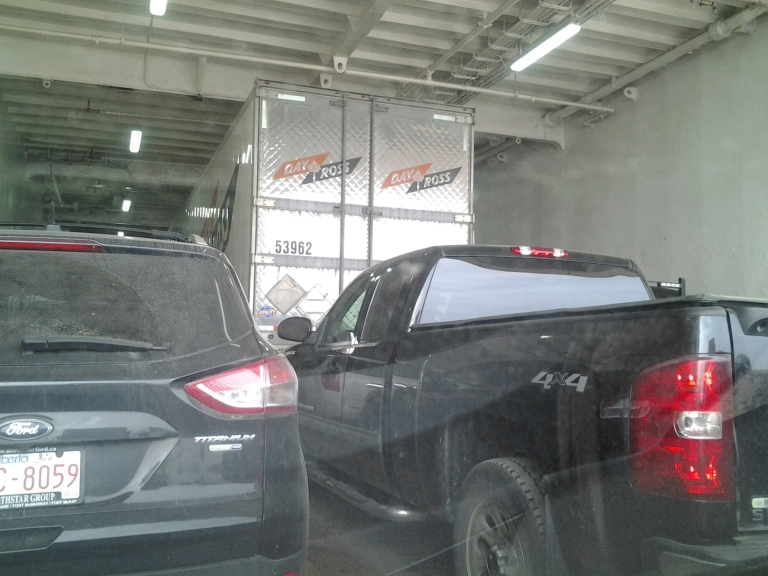 But when you plan it right, when things are running smoothly and when you are excited to get back on the Island, the crossing on the Earl W. Winsor is a lovely thing indeed.

As a teacher in Gander, we used to bring Gr. 3 students on a day trip to Fogo Island. The crew were most obliging and allowed the students to visit the wheel house and (safely on the ferry equivalent of auto-pilot) children could sit in the captain’s chair and take the wheel. 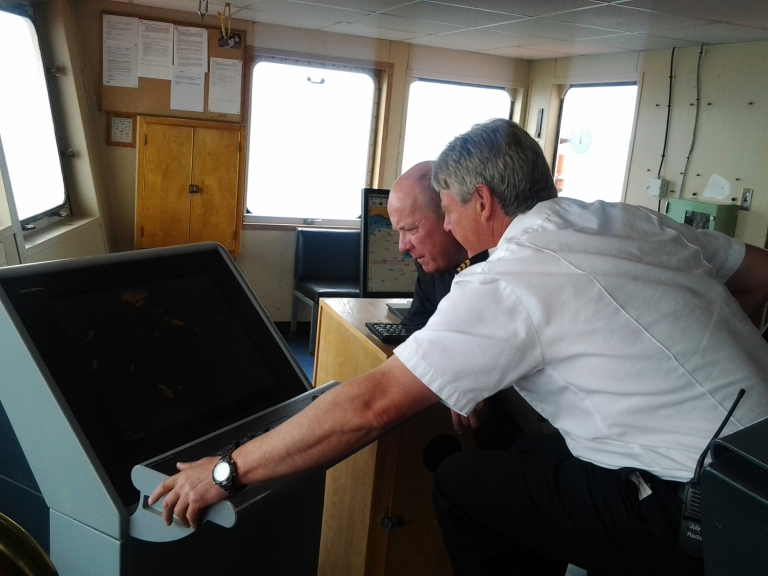 The crew still obliges me and my most recent tours of the wheel house were with my cousin’s husband Tim, visiting from Ontario and Fred, a very excited San Franciscan on his way to the Fogo Island Inn. Both men were delighted and full of questions and crew explained sonar and radar and the plotting of the vessel on the computer screens. I even learned she’s powered by two locomotive engines thanks to a question by one of the ‘big boys’ that toured this summer. 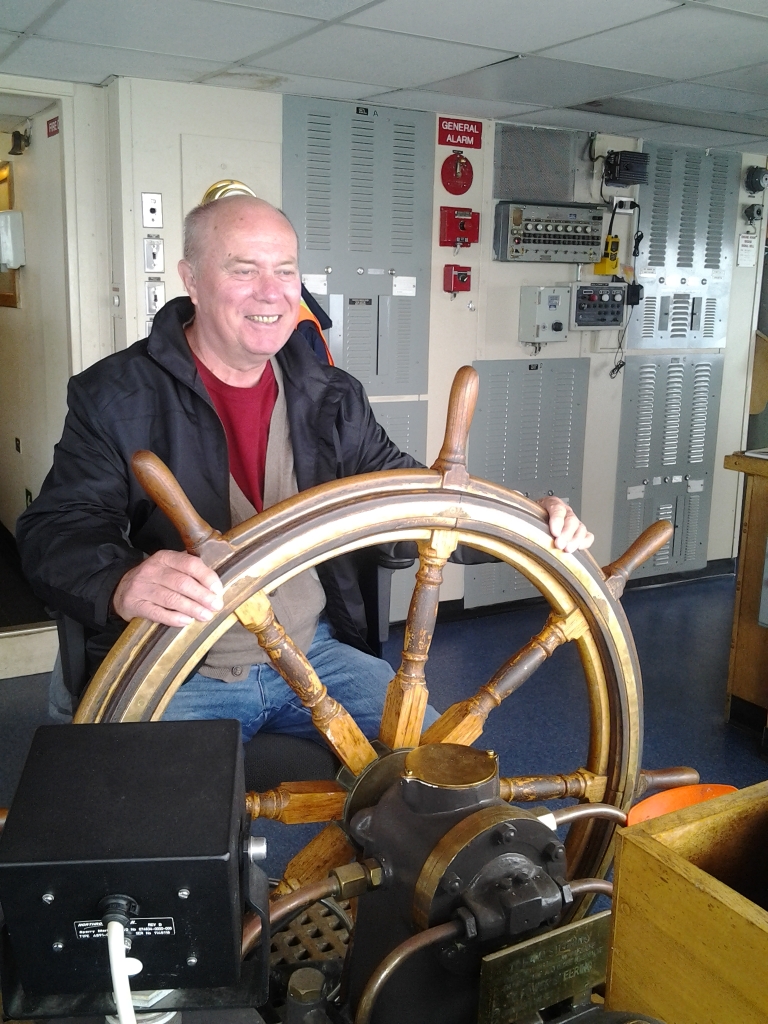 The ferry is an attraction to visitors coming to Fogo Island. It’s also an opportunity to share information to visitors and residents with bulletin boards and other displays. 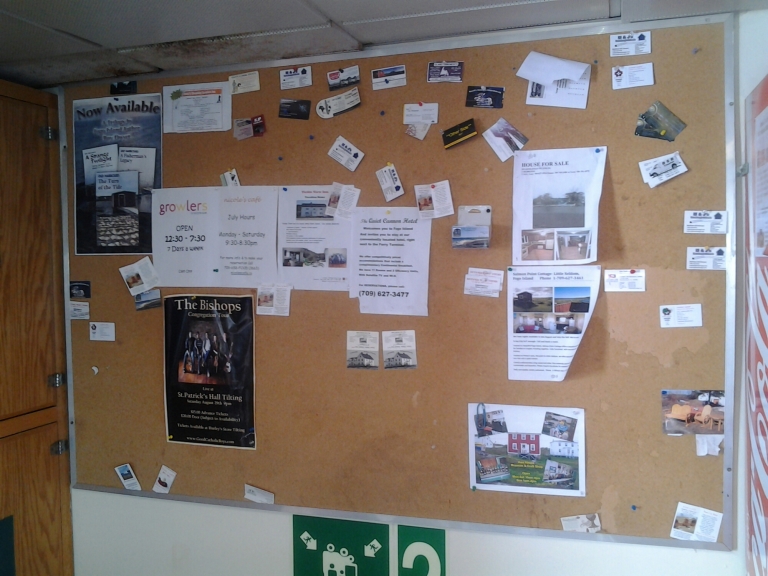 Recently, the addition of the Flat Earth Coffee Outpost adds a nice snack and coffee option for the trip. The line-up at the coffee when the boat leaves dock is indicative of the popularity of this service. 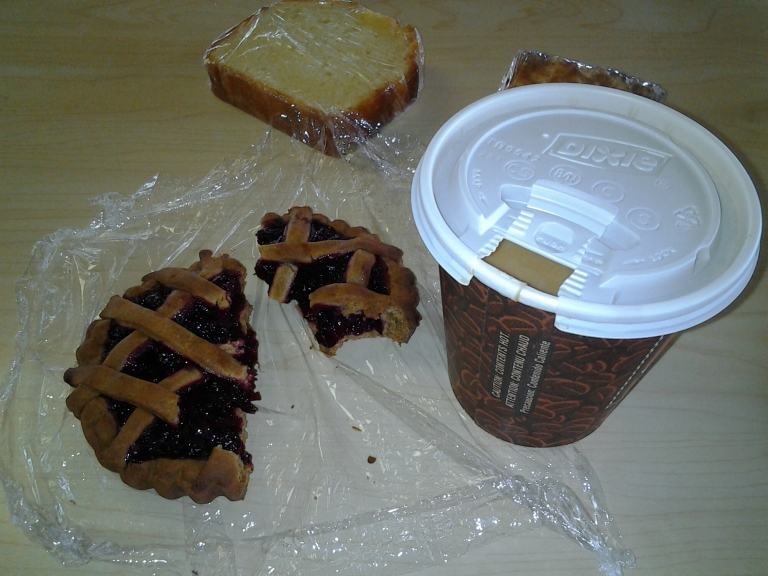 The other additions are the beautiful quilt display in the cafeteria area of the boat and the slide shows about the various communities in the municipality of the Town of Fogo Island. 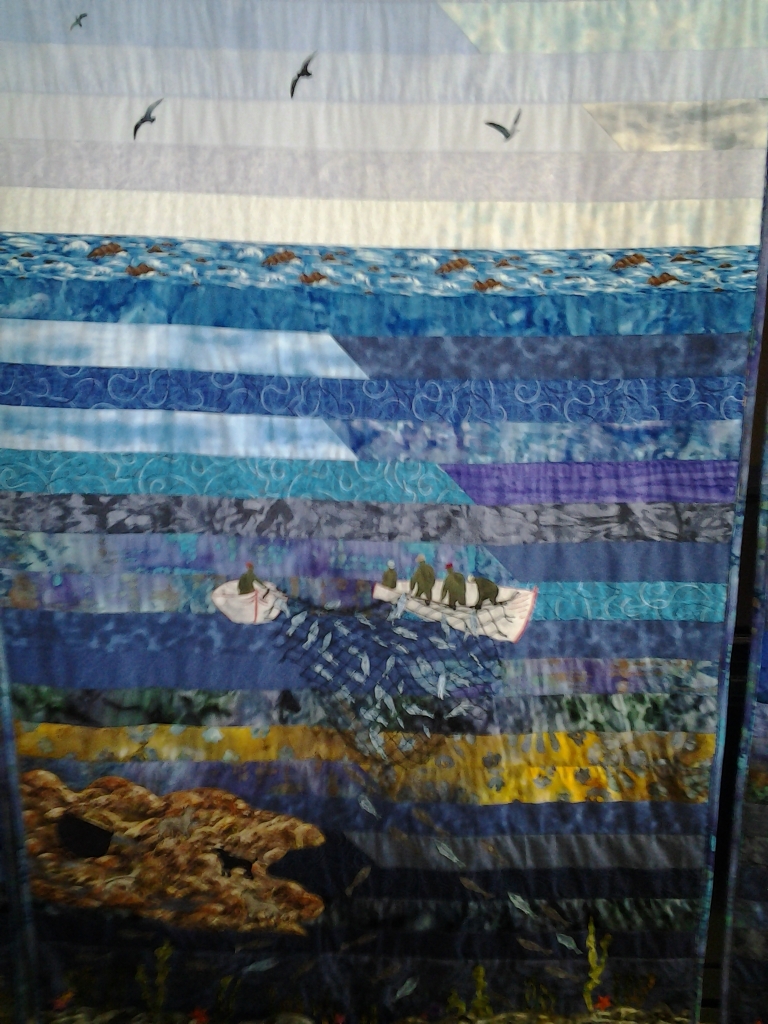 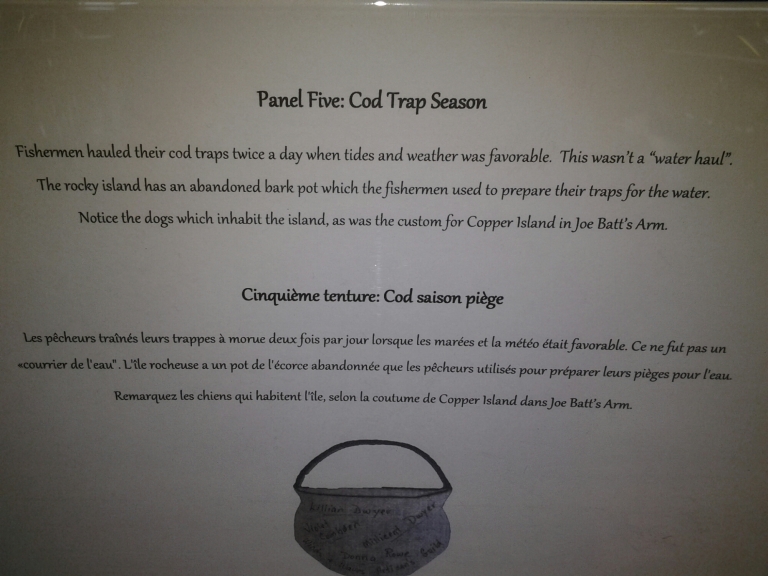 The quilted panels are beautiful works of art and the signage explaining them, in both English and French, is extremely well done. My friendly suggestion is that someone, anyone, puts a sign somewhere in the lounge area of the boat telling that the quilts are there. I did two round trips without seeing them and have shown them to many people during a crossing who also did not realize they were there. Such a beautiful display should be seen and appreciated by all. With the regular traffic to the washrooms and canteen, perhaps a sign with an arrow indicating there is a heritage display down the hall might be all that is needed. 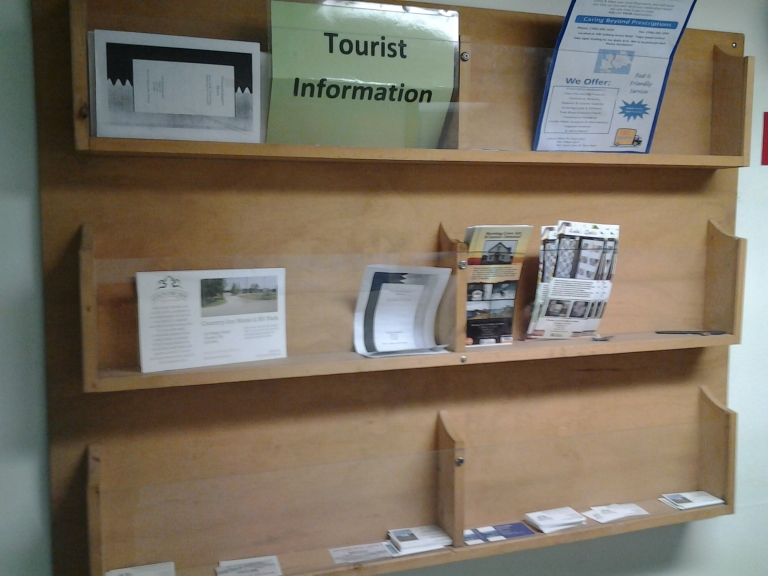 The videos of scenes and information about Fogo Island are great, running on a loop in both ends of the ferry. The Town put out a call for photographs to be submitted and I’m sure would welcome any more to keep the video current and maybe add elements they did not get the first time around.

As a first opportunity to encourage visitors to spend as much time as possible and see a variety of sights, the ferry is the first point of contact and with a good 40 minute crossing, a lot of tourism and other appropriate promotion could be done.

I’ve made a lot of trips to Fogo Island and Prince Edward Island on the ‘old boat’.  I’m sure I’m not the only one who will be slightly nostalgic when she is replaced this fall. I’ll also be hopeful that the new boat is as much a  workhorse as this old boat was.

To the crew, who work (or try to) in all kinds of weather and conditions, who get called out at all hours for emergency trips and who must get frustrated with government decisions made that hinder crossings sometimes to save money, thank you. 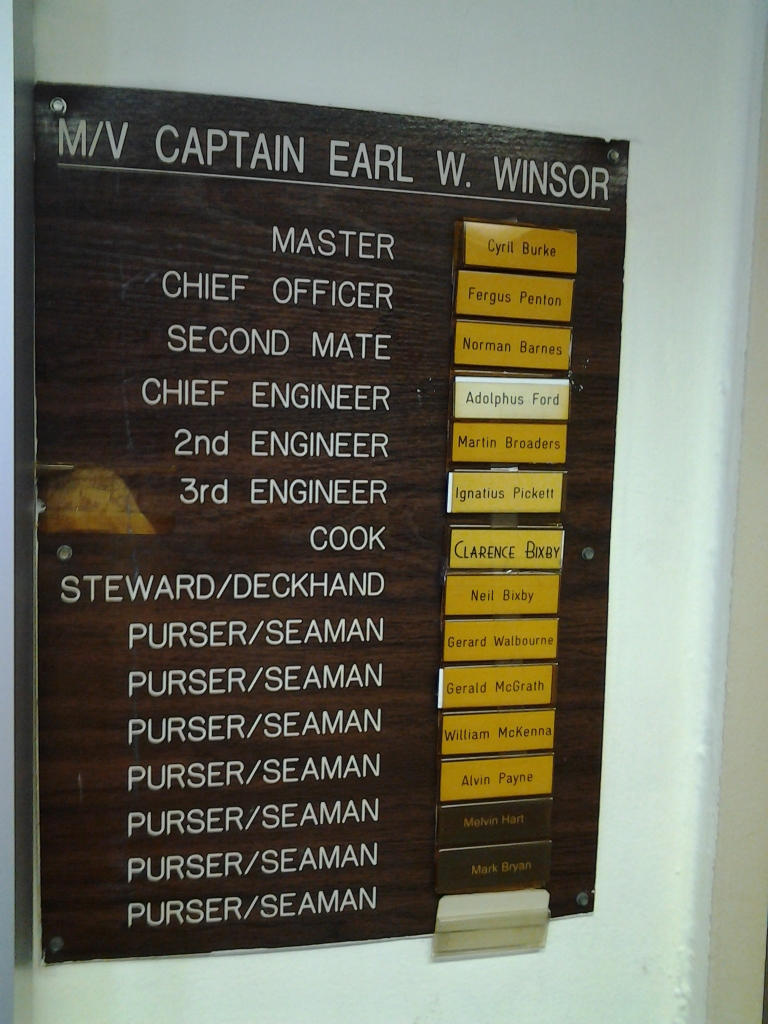 Even when we grumble, we really know, without you, there’d never be a crossing.

Smooth sailing and fair winds to the Winsor when she goes and the Veteran when she arrives. 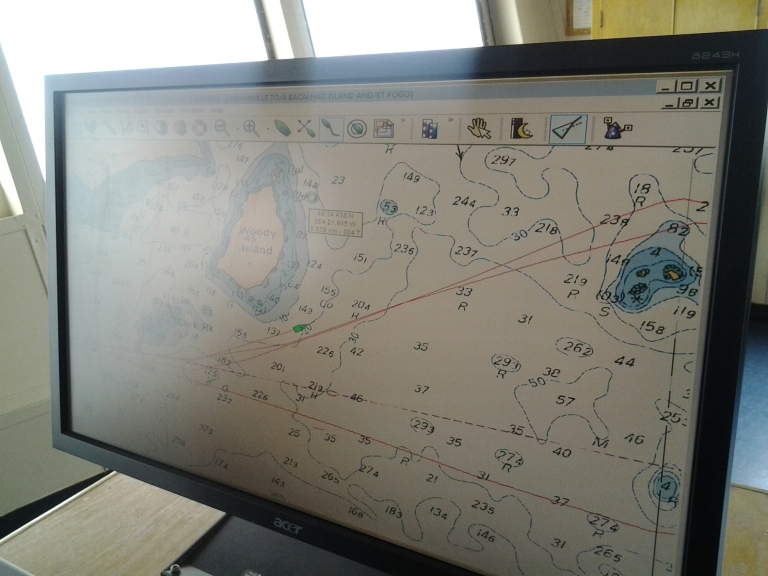